Alcohol Abuse, it’s one of the most dangerous diseases and chances are you know at least one person  who is struggling with it every day.

As we grow into adulthood, society projects onto us the idea that drinking alcohol is a social norm. Whether we unwind in the privacy of our homes with a bottle of wine, or should we choose to join friends for happy hour after work. Whatever the case may be, it doesn’t matter the time of day nor the day of the week, it is ingrained in us that there is always an acceptable situation for alcohol consumption.

It is this social norm and the ease of addiction, that has caused alcohol abuse to be such a prevalent issue across the country.

Here’s a few cold hard facts for you from a 2015 National Survey on Drug Use and Health (NSDUH) about the prevalence of binge drinking amongst U.S. citizens 18 years or older:

Nearly 90,000 people per year in the United States, die from alcohol-related causes, making it the fourth most prevalent cause of death in our country. From those statistics alone, we see how many people are impacted by this disease every single day. It is something that few speak of, yet they struggle with every day of their lives.

If you think you or a loved one, may be abusing alcohol, it’s time to make a change before becoming simply another statistic. We put together the following list of signs of alcohol abuse, to quickly spot if you or a loved one may need help.

If you frequently drink and you begin to notice that you’re struggling with memory loss or even find yourself blacking out regularly, there’s a strong chance you may have a drinking problem. Heavy alcohol use causes permanent and irreversible brain damage, which directly affects your memory. So if you constantly have high blood-alcohol levels, you’re essentially wearing down your brain to the point that it can’t function properly.

It may start as simply foggy periods of time, where you’re only losing what you think are minuscule details. However, as the excessive drinking continues, you will begin to increasingly lose more periods of time and in extreme cases, blackout.

Our brains process a lot of information very quickly, so it’s often normal for us to have trouble recalling every single detail of a given day or night. However, large chunks of time, we should be able to remember the next day.

Let’s say for instance, you’re watching a movie. Chances are you won’t remember every single conversation within that two hour film. This is normal. Now let’s say you’ve been drinking and you don’t remember anything within a two hour window, in which you were fully coherent. This is a sign of trouble.

To ignore this sign, is to invite serious long-term health concerns. 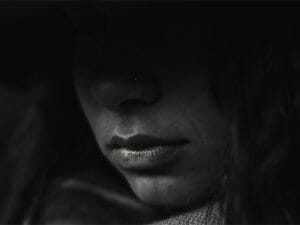 Many recovering alcoholics, contributed their dependence on drinking to the need to simply be happy. Whether they were going through a tough time in their lives or struggled with anxiety, depression, and other debilitating diseases.

In the end, they found themselves self-medicating with alcohol. One of the many side effects for drinking, is often a temporary mood boost. You know, when you first start feeling the liquor kick in and you’re more social, friendly, and overall a happy drunk? That’s the mood-enhancing effect of alcohol and it’s often why we become dependent on it.

Human beings want to be happy. We want to enjoy life. We want to be free from all stress. It’s something that we all aspire to have every single day. As a constant pursuit, sometimes we find ourselves living unhealthy lives to attain such happiness.

The problem with alcohol, is that the feeling of happiness is not only temporary, but in most cases, it leads to further bouts of anxiety and depression once the mood boost wears off. Not to mention, the more you self-medicate with alcohol, the stronger your dependence becomes and also, your tolerance increases. This means, you need more alcohol, more frequently.

Such a situation, can actually cause you to withdraw from social settings, possibly brood, or even lash out at loved ones and strangers, simply because you’ve become increasingly more unhappy, as your tolerance and dependence has grown.

Under no circumstances, should you use alcohol as a solution to other problems.

Since alcohol has the power to change our moods and cause us to potentially forget periods of time, it shouldn’t be a surprise that it tends to ruin our relationships and overall, positive aspects of our lives. Companionship in any form, whether as a friend, family member, or lover, is natural for human beings. Like happiness, we have this innate desire to have a companion.

However, for those who excessively drink, it’s alcohol that becomes your companion. It’s alcohol that takes over your life. If you’re abusing alcohol, you may find that it has completely consumed you to the point that you cannot maintain relationships with others. There’s simply no room for you, alcohol, and another person. This is why many relationships with people who struggle with alcohol abuse, become toxic and unhealthy.

The same is true for the things you once enjoyed doing before you became a heavy drinker.

This could have been:

Everyone has the things in their lives that they thoroughly enjoy, but with an alcohol problem, we often find ourselves no longer doing those things.

Here’s how you know something is a problem. If you’ve tried numerous times to either cut back or completely quit drinking, but you can’t seem to kick the habit. Yep, that’s a problem.

For many who suffer from alcohol addiction, simply waking up one day and giving up liquor altogether, isn’t possible. From a physical standpoint, your body has become dependent on alcohol. This means, if you try to quit cold turkey, you’ll experience symptoms of withdrawal. In extreme cases, alcoholics even die.

Conversely, from a mental standpoint, it’s so difficult to give up something that you believe either helps you in some way or that you’re simply accustomed to having every day. If you find yourself in a situation, where increasingly over time, you have drank more and more each day, the hold that alcohol has on your life can be difficult to overcome by yourself.

This is why so many enter treatment facilities and seek support as recovering addicts. It truly often takes a village to quit.

As stated before, drinking is such a social norm that for many, it’s often looked upon as a means to fit in and make friends with others. This thinking, isn’t only prevalent in younger people, but also as we continue to age and become adults. Alcohol consumption, like anything else, is a choice. But when society projects this image of normalcy to drinking and even worse binge drinking, it becomes more of an obligation or responsibility to participate.

This often leads us to drink in situations that we otherwise wouldn’t, which opens us up to the possibility of abuse and addiction. If you find that in social settings, you feel almost compelled to drink or uncomfortable when a drink isn’t in your hand, you likely have an alcohol abuse problem.

It may seem like it’s not a big deal because everyone’s doing it, but it’s often the first sign of potential trouble. It’s better to be aware of roadblocks up ahead, than to simply keep chugging along until you find yourself knee deep in a ditch. 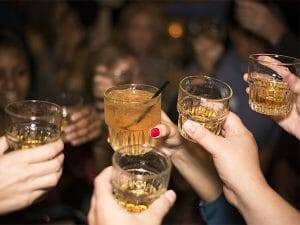 For many people, when you’ve been drinking, you often get a rosy color along your cheeks. As you sober up, the color fades until you’re back to your normal skin color. However, for chronic drinkers, it’s common for the red/flushed skin color and broken capillaries across your face, to never go away.

This is because there’s always the presence of alcohol in your bloodstream, damaging your skin and blood vessels. You’ll never have a situation where you simply wake up and all of a sudden your face is red. This is a sign that like many others takes time and involves heavy alcohol consumption during that time.

However, it’s something that if you’re conscious of your appearance, like most of us are, you’ll be able to spot. If for any reason, you don’t notice it, family and friends likely will. If you reach a point where your body is physically changing as a result of your drinking, you need to consider a life change that no longer includes alcohol.

One of the most common signs of alcohol abuse is that of trembling hands. There’s two different causes for shakiness of your hands:

Let’s talk about the first cause, damage due to excessive alcohol intake.

If you had a day or night where you physically consumed way beyond your limit of alcohol. This could be a night of partying or a day where you drank from morning, all the way until you passed out later that night. In such a situation, we often feel extremely dehydrated the next day and find that our body is not only weak, but our hands also have a slight tremble.

For alcoholics, this is a recurring situation and so your body becomes so damaged and worn down from the amount of alcohol it’s taking in, that you always have a slight or in worst cases, prevalent trembling of your hands.

Now, let’s talk about about the second cause, withdrawal because your body is dependent.

If you ever try to quit drinking, one of the most common signs of withdrawal will be trembling hands. This is referred to as, “delirium tremors,” or “rum fits.” Heavy alcohol consumption over an extended amount of time affects not only memory loss, but also your cognitive reflexes and motor skills.

A sign of trembling hands when you haven’t had a drink, is a direct indicator that you’re suffering from an alcohol abuse problem.

What Can I Do if I Have a Problem?

If after reading this, you find that at least one or two of the signs applies to you or even a loved one, the best thing you can do is seek professional help. There are a wealth of treatment centers across the United States, that can assist you with overcoming this disease.

It’s important to understand that while the road ahead may be a long one, you’ve already taken the first step in identifying the problem. Now the next step, is to allow others to help you.

Five Things to Look for in a Treatment Center