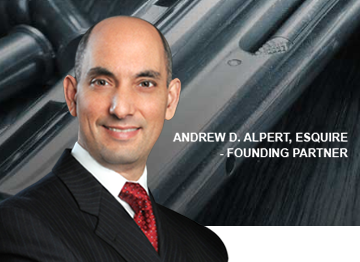 Do you want over 30 years of Maryland law experience behind you in your Maryland DUI case? The Law Offices of Alpert Schreyer have successfully represented over 1,000 individuals charged with DUI and DWI in Maryland and the District of Columbia.   Partners Andrew Alpert and Michael Schreyer use their specific knowledge and training to create a well-rounded defense team known for their commitment to clients and courtroom proficiency. Contact us NOW for a FREE consultation!

You hear about drunk driving arrests every day, but no one ever thinks it will happen to them. When it happens, a DUI arrest in Maryland or any other state is scary, stressful, and intimidating—plain and simple. A DUI arrest can change your life for the worse, leaving a negative impact on your immediate future and following you for the rest of your life. Fortunately, a DUI arrest isn’t the same as a conviction, and you can fight the charges against you.

From the moment police arrested you, the clock began ticking, and events and deadlines fell into place—you may have 10 days from the date of your arrest to save your driver’s license, you may have to attend a Motor Vehicle Administration (MVA) hearing to fight for your driving privileges, and you will face a criminal court date.

Although you probably feel overwhelmed—and may want to put your arrest out of your mind and “deal with it later”—you must act fast to take the necessary steps to help save your license, protect your legal rights, and fight the criminal charges against you. We can help.

In Maryland, if the officer who stops you believes that you drove under the influence, the officer can request that you submit to either a field sobriety test or to a Breathalyzer test. If your test results in a blood alcohol concentration (BAC) of more than 0.08 percent, or if you refuse to submit to the test in the first place, you’ll receive—along with your traffic citation—an Order of Suspension. In that case, the attending officer will issue you a temporary paper license (in effect for 45 days) and confiscate your official Maryland driver’s license.

In Maryland, most DUI convictions are misdemeanors, which means that, although they’re not felonies, they’re criminal convictions and are, thus, extremely serious. In Maryland, it’s illegal to drive under the influence of alcohol (DUI)—or with a BAC of more than 0.08 percent. If the court finds you violated this law, you face a sentence of a year in jail, revocation of your driver’s license for as long as six months, a hit of 12 points on your license, and a $1,000 fine. Any one of these—on its own—is serious, and in combination, they can leave devastating effects.

THE PERSONAL RAMIFICATIONS OF A DUI CONVICTION

While you no doubt understand the significant consequences of DUI, you may not have considered how such a conviction can damage your future. Losing your driver’s license can cause extreme hardships—and it can, obviously, directly affect your job. After all, getting to and from work is a prerequisite of any position. A significant lapse in the ability to drive legally makes most people’s lives much more difficult. Furthermore, your car insurance premiums are likely to spike. Unfortunately, however, this is just the beginning.

If a court convicts you of a DUI and sentences you to jail time, things can get much worse. Jail time is closely associated with both social stigma and diminished self-esteem (to name a just two negative consequences). Furthermore, a DUI that forces you to step away from your life to spend time in jail can hurt your family’s welfare and well-being, cause serious problems at work (or even cause you to lose your job), and lead to psychological or emotional consequences that may prove even more difficult to overcome.

None of this is easy. In fact, the overall effects related to a DUI that leads to a jail sentence are hard to adequately calculate—but they aren’t hard to imagine. A sentence of jail time is just as bad as it sounds. Call the legal team at Alpert Schreyer, LLC, for help today.

Because a DUI conviction can leave such a significant effect on your career, it bears taking a closer look. Employers may simply not want to deal with the optics of employing someone convicted of a DUI. In addition, the state can revoke or suspend some professional licenses with such a conviction. If you do lose your job or are looking for a job, many employers conduct background checks and may feel less inclined to hire someone with a criminal record—which is what you’ll have after a DUI conviction.

In other words, if you’re convicted of a DUI, you have a lot to lose. Your finances, your family, your self-worth, and your career can all take a hit. If you’re looking at DUI charges, you need an experienced Maryland DUI lawyer at Alpert Schreyer, LLC. While every DUI case is unique to its own circumstances, an experienced DUI attorney will help you explore every option and proceed in a manner that optimizes your chances of resolving your case favorably.

Furthermore, if a court convicts you of driving under the influence, you may elect to participate in, or opt-in, to the Ignition Interlock System Program for at least 180 days and thus bypass license suspension.

The Ignition Interlock System Program allows those convicted of DUI to keep their driving privileges so long as they can prove that they are driving sober. Such drivers are only licensed to drive vehicles equipped with ignition interlock devices.

Ignition interlock devices connect the vehicle’s ignition system to a Breathalyzer that precludes the engine from turning over when the driver’s BAC exceeds the device’s calibrated setting (which is determined when the driver breathes into the Ignition Interlock System device). Furthermore, the device will prompt additional testing sessions while the vehicle is running. Maryland establishes who’s eligible for participation in this program and how that participation will proceed.

If you’re facing Maryland DUI charges, you’re no doubt feeling overwhelmed and more than a little anxious about what’s to come. A DUI conviction can result in serious negative consequences for your future, but a dedicated DUI attorney will carefully analyze your case, clarify your options, and help guide your case toward its best possible resolution.

Your rights and your future matter, and the experienced legal team at Alpert Schreyer, LLC, in Maryland, are here to help. Our knowledgeable DUI attorneys have the experience, skill, and determination to aggressively fight for your case’s most positive outcome. We care about you, so please contact or call us at (866) 444-6363 for a free case evaluation today.

Criminal charges can prove difficult to manage and can throw every aspect of your life into disarray. If you are looking at a criminal charge, retain knowledgeable, experienced legal consultation to bring your case to the best possible conclusion.

Working with Alpert Schreyer can give you this benefit. Call us today at (866) 444-6363 to schedule a free initial case evaluation, or fill out our confidential online consultation form.

We have experience with:

A criminal charge can quickly change the course of your life. At Alpert Schreyer, our aggressive representation begins from the first moment you hire us. We are skilled at making compelling arguments at bond hearings and getting the amount of bail reduced or eliminated. We will marshal the facts to show the judge that you are not a flight risk or a threat to the public or to witnesses in the case. In many situations, we can get clients released on their own recognizance, which means they do not have to post any money or collateral. Instead, you simply promise to show up to your future court hearings and any future trial.

Your lawyer at Alpert Schreyer also will not simply accept the state’s version of events. Instead, we know how to gather evidence ourselves, particularly hard-to-find evidence that can make the difference between winning a case and losing it. For example, our evidence collection can encompass:

This type of evidence collection takes time and know-how. At Alpert Schreyer, we recognize that many cases are won or lost at this early stage of the case, so we spare no resource in fully examining the factual record on your behalf.

In addition to building a defense, we work aggressively to get key pieces of the state’s case thrown out of court. The state and federal constitutions place limits on how the police can collect evidence and how the state can use it. Often, the state violates these rules. If your criminal defense attorney objects, you can suppress this evidence, which means it may never see the light of day.

At Alpert Schreyer, we have successfully suppressed:

To successfully convince the court to throw out evidence, lawyers need experience, attention to detail, and an ability to think quickly on their feet. The lawyers at Alpert Schreyer possess all of these qualities and are prepared to use them in your defense.

When we can’t get the court to throw out evidence, we will attack its credibility. For example, we will methodically cross-examine all of the state’s witnesses to uncover their hidden biases and bring their contractions to the attention of the judge and jury. We have successfully cross-examined hundreds of witnesses in our careers. We know how to patiently lay traps for even the most conniving witnesses and get them to impeach themselves.

At Alpert Schreyer, we are committed to achieving the most favorable result possible for our clients. However, sometimes the best possible outcome will be to take a plea bargain if the prosecutor offers one. We are fully prepared to take all cases to trial, but we also are ethically bound to explain to you the likely outcome if you try to fight your case in court.

By taking a plea bargain, you might agree to plead guilty to a lesser charge, or the prosecutor might recommend a lighter sentence, such as no time in jail. These can make for attractive options, depending on your life circumstances and the strength of the state’s evidence.

At Alpert Schreyer, we will help you fully understand the consequences of pleading guilty so that you can make an informed choice. Many factors go into the analysis, including your criminal history and whether you want to risk going to trial. Although we can help you think through the consequences of accepting a plea, the choice is ultimately yours.

THE NEGATIVE CONSEQUENCES OF A CRIMINAL CONVICTION

If you stand accused of a crime, take this charge seriously. Even if you do not end up serving time in jail, convicted criminals face numerous consequences for criminal convictions. For example, a conviction might:

These collateral consequences can prevent you from getting back on your feet and rebuilding your life, even after you have paid your debt to society. To improve your chances of reaching a favorable outcome, hire a criminal defense attorney as soon as possible.